This is not something that I say lightly, but our meal at Vernick Food & Drink was the best all-around meal we have ever had.  It started before we even got there.  We were running a little late for our reservation, so I called to let the restaurant know.  When we arrived, the hostess was genuinely thrilled that we let them know.

We were dining with Marnay’s good friend Tracy as well as Marnay’s Mom, who has joined us for a number of the dining adventures featured on this blog.  The hostess led us back through the bar to the narrow dining room in front of the open kitchen.  Our table was in the section of the dining room that was right in front of Chef Vernick.  It was actually a better location than the chef’s counter, at the opposite end.  The smell from the kitchen was intoxicating as soon as we sat down.

The menu is separated into toast, raw, vegetables, small plates, large plates and simply roasted from the wood oven.  Vernick is famous for its toast, so we knew for sure that would be an essential part of our meal.   Before we made any decision, though, we ordered some drinks.  Marnay’s Mom and Tracy got glasses of cava and Marnay had a glass of Sonoma Chardonnay.  I had a cocktail named El Chucho Roto, a mezcal and amaro based drink.  The amaro really cut out the smokiness of the mezcal. 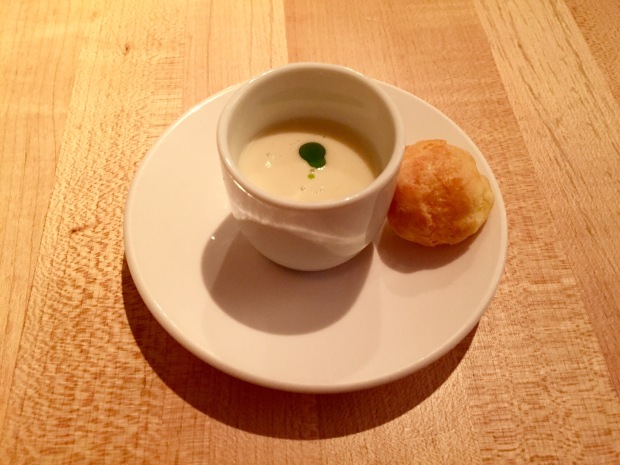 After consulting with our server, we ordered the Maryland crab toast, the pumpkin and brown butter toast, the spaghetti squash salad with a crispy egg and mushroom leek vinaigrette, the pasta special with homemade spaghetti, olive oil poached Icelandic cod in a spicy saffron tomato sauce, brussels sprouts in an ancho caramel sauce and finally, half of a roasted organic Amish chicken in a lemon herb jus.  Our incredible server asked if she could take the liberty of pacing out the dishes for us, which the restaurant did beautifully.

First came an amuse bouche of celery root soup w/ spicy arugula oil in an espresso cup, for drinking.  Our first official course was the crab toast with a lemon aioli and the spaghetti squash.   The spaghetti squash had a breaded, fried poached egg sitting in the middle which our server suggested that we break open first.  That way, the runny yolk would become the sauce for the squash.    The toast, cut in threes, is intended to be shared.  When we started biting into in, the entire table fell silent.  The toast was thick but not so thick so that you couldn’t bite into it, with just the right amount of crunch.  The crab was extremely fresh and tasted like the sea.

Once we were done, the server brought our next course about three minutes later.  We thought that the pumpkin and brown butter toast might be sweet, but we were pleasantly surprised to find that the rich pumpkin only had a touch of sweetness. 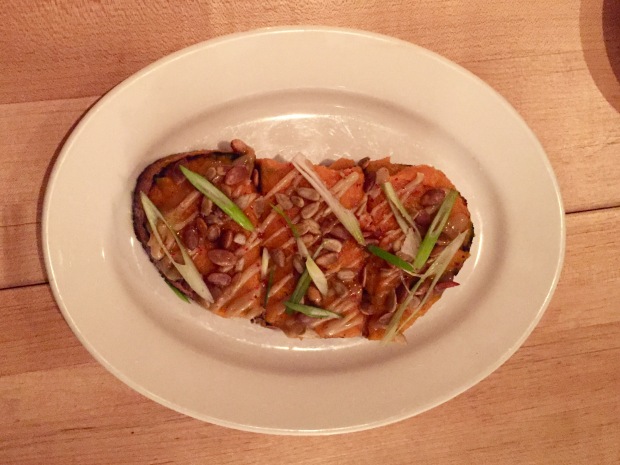 After we finished the toast, our server brought us a chili vinegar for the roasted chicken.  As an example of how great our server was, Marnay asked her what was in the vinegar.  Our server knew every ingredient, down to the toasted fennel.  It was as if she made it herself.

Before our next course, we ordered a second round of drinks.  Marnay got another chardonnay and her Mom and Tracy got more cava.  I, however, wanted to test our server.  I told her that I wanted a local beer—the style didn’t matter, but since we don’t live in the area, I want something local.  She stared at me for a few seconds and then asked, “Do you like sour beers?”  I love sour beers!  It was almost as if she stared into my soul.  She recommended a saison from Tired Hands that’s brewed with salt and citrus. 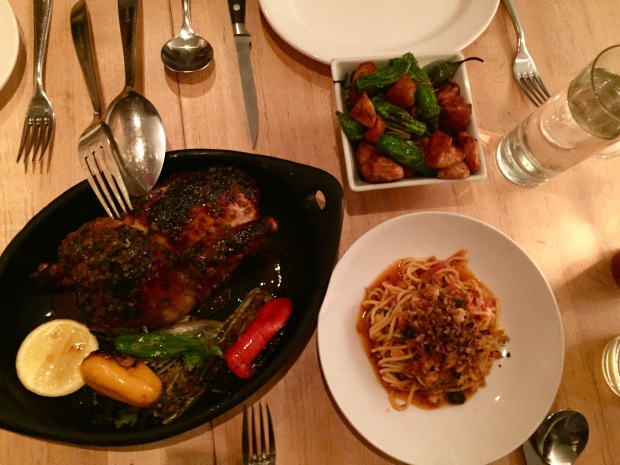 When the rest of our order came out, we received potatoes and shishito peppers “complements of Chef Greg.”  We had been praising him and pointing at the kitchen all night, mesmerized by what was going on, and he must have heard us!   He was so focused all night, though.  It was a wonder to watch.

The chicken was possibly the most perfectly seasoned roasted chicken any of us had ever had.  It went very fast. 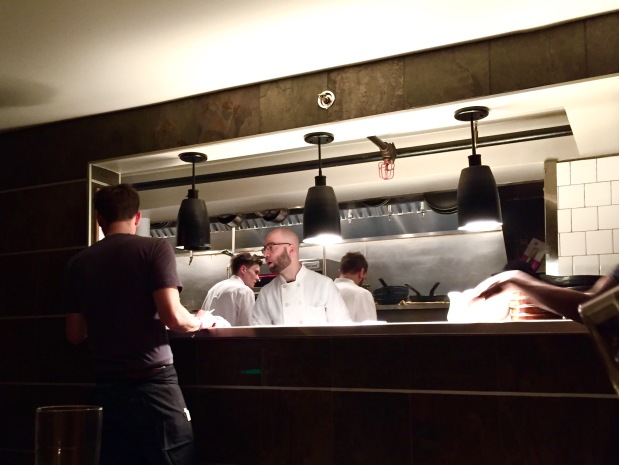 The cod in the homemade spaghetti was broken into small pieces, which reminded me of shrimp.  The brussels sprouts were at once smoky and hot from the ancho and sweet from the caramel.  The flavors were intense, but they balanced out nicely.

When we first ordered, I mentioned that we could always take home leftovers if we were ordering too much.  That certainly was not necessary!  All that was left was a few brussels sprouts. 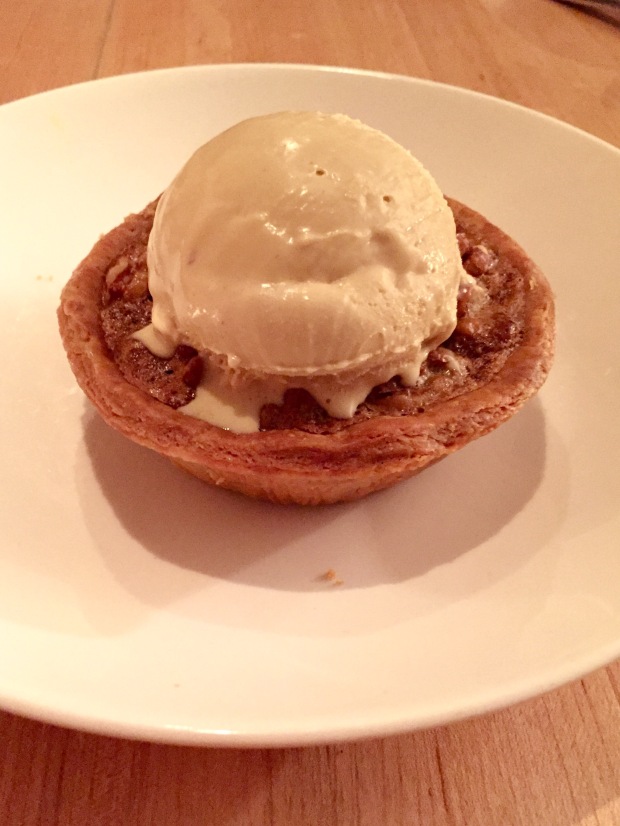 After a meal this great, of course we had to get dessert.  We got the toasted walnut maple pie with bourbon ice cream as well as the chocolate crisp ice cream.  The pie tasted like a much, much better version of a pecan pie and the bourbon ice cream was rich, dense and flavorful. As we were leaving, we noticed that the Chef took a break from what he was doing.  He waited until we put our coats and then personally thanked us for coming.  We did not see him do that for anyone else.

A little touch like that just set us over the edge from a great meal to an exceptional meal.  All four of us agreed that this was probably the best all-around meal ever.  We felt like we were treated like VIPs.