I ran my second marathon on Sunday May 8th in Wilmington, DE.  Part of the reason I chose this particular race was because of my schedule.  The other reason was so we could eat at a great restaurant the night before!

Bryan Sikora was nominated for a James Beard Award in 2014 for Best Chef Mid-Atlantic for his work at La Fia and he is quickly taking over the nascent downtown Wilmington dining scene, having recently opened Merchant Bar and Market Street Bread & Bagel. We had previously gone to La Fia in November 2014 and had been looking for an opportunity to return. The marathon seemed like the perfect opportunity.

We ate with my grandparents and parents but I am only going to focus on what Marnay and I ate. The two of us made a meal out of two small plates and one large plate. If you go to La Fia, I recommend getting this amount of food as it was good for two people. The laid back and gracious servers will not pressure you to order a certain amount of food, either. 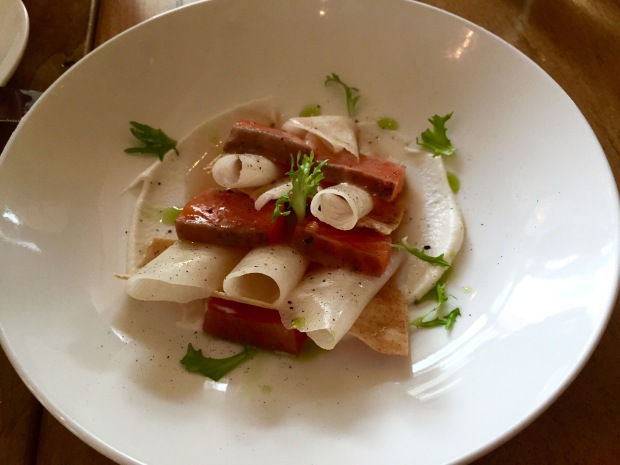 The server asked if we wanted the small plates first or with everyone’s entrees.  We asked them to come first.  I’m just impressed that he even asked, instead of the dishes coming from the kitchen “as they’re ready.”  We started out with the lightly seared smoked salmon with shaved turnips in a sweet, acidic sauce and a vegetable puree.  The dish also came with “horseradish crackers.”  We had never had such thick pieces of smoked salmon.  It looked a lot like a play on sliced rare tuna.

Along with the salmon, we ordered the grilled smoked merguez with chickpeas, roasted cherry tomatoes, and greek yogurt.  The best part of this dish was the THICK housemade greek yogurt mixed with the slight heat of the merguez and the chickpeas.  The merguez was good, although a little crumbly.

We’re always on the lookout for restaurants that serve gruner veltliner by the glass, and La Fia had one.  Marnay enjoyed a glass while I abstained, since of course, I was running 26 miles in the morning. 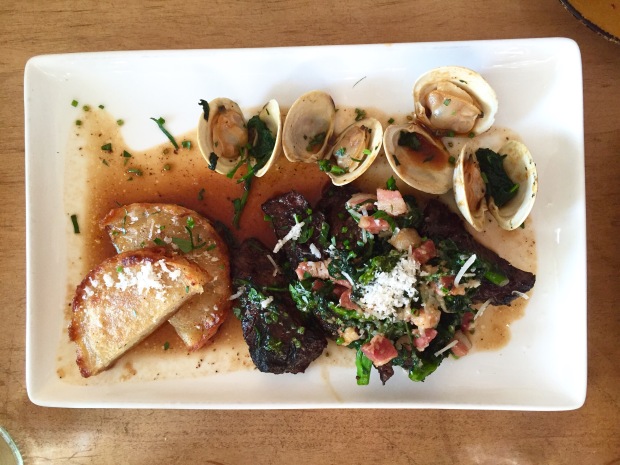 The entrée that we shared was grilled hanger steak with sautéed littleneck clams, pancetta, a crispy potato cake, broccoli rabe and a red wine nage. Nage is a type of seafood stock. The hanger steak, one of the most flavorful cuts of meat, was cooked to a perfect medium and had its characteristic chew. The grill imparted just the right amount of char and the nage gave the dish a rich, umami flavor. While the clams were one of the better parts of the dish, the potato cake tasted extraneous.

I ended up having a very enjoyable marathon experience and I think that our meal at La Fia played a role!  This is definitely a restaurant we would go back to.