On Sunday, we took the metro Silver Line for the first time since 2014 and got off at the Greensboro station. After a walk of about three miles (and dodging cicadas along the way), we arrived in downtown Vienna and to our lunch destination, Chase the Submarine.

Chase the Submarine is a deli and specialty market operated by Tim and Joey Ma, the minds behind Water & Wall and Kyirisan. We heard about Chase the Submarine through Washingtonian’s Best Cheap Eats issue, and since we rarely make it out to this part of Virginia, we were excited to try it and see if it lived up to the hype. It did not disappoint! We shared the housemade pastrami sandwich served with carrot sauerkraut, whole grain mustard, crème fraiche and pickled shallots on toasted rye. The thinly-sliced crispy pastrami reminded me of bacon, while the carrots gave a nice crunch but were thin enough so that they did not detract from the rest of the sandwich. 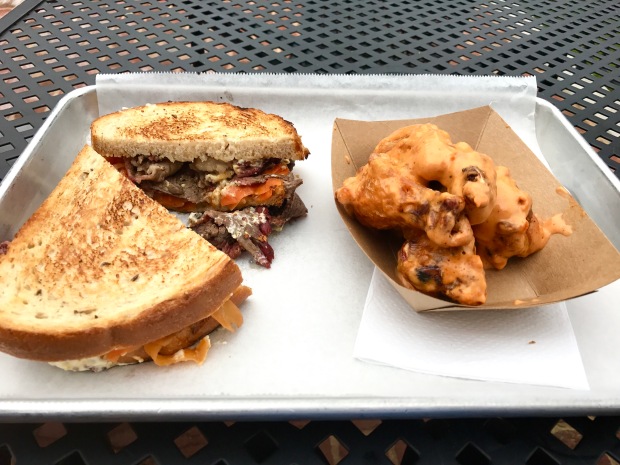 The ultimate test: How did this pastrami sandwich compare to Smoked & Stacked? I think that Chase the Submarine is slightly better, while Marnay gives Smoked & Stacked the edge. We also ordered the crème fraiche wings, which are coated in a mix of crème fraiche, gochujang and tamari. I think that it is genius to coat hot wings in crème fraiche, since it cools off the heat from the gochujang, without the need for dipping sauce. The tamari rounded things out with its umami flavor. I would order the wings every time at Chase the Submarine.

Afterwards, we walked west on the W&OD Trail to Caboose Brewing. Caboose’s patio looks out on the trail, and it’s incredible the amount of bikers that stop in for a bite to eat or a beer, or even just to use the restroom. Caboose even has bike tools that they’re able to use.

We stood on the patio and people-watched while enjoying some beers. Our favorite was the Citra Session IPA. Its low alcohol content makes it refreshing for a warm day full of exercise. The perfect late-Spring afternoon beer. 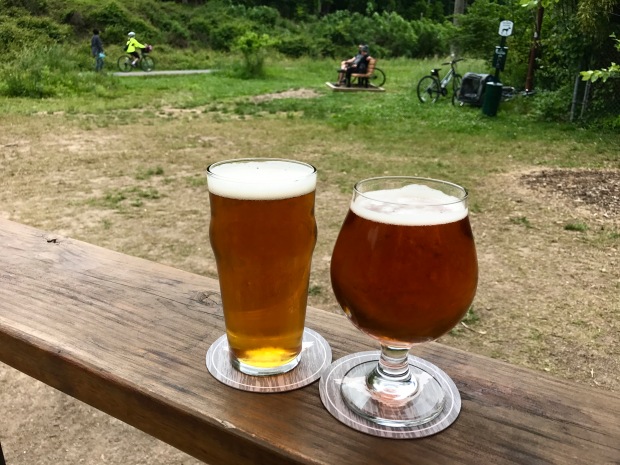 Even with all we had done, we were not ready to go home just yet. Instead, we walked almost 5 miles to Taco Bamba in Falls Church. Of course, there was a perfectly good Taco Bamba in Vienna but we wanted the adventure and exercise. We arrived during the peak of the Sunday rush and my gosh was it crowded! Still, we were still able to squeeze into two of the high top chairs that ring the restaurant, which is basically a takeout joint. Taco Bamba is the creation of Victor Albisu, the chef behind the downtown DC steakhouse Del Campo.

The chef’s menu has many more adventurous options than your typical taqueria. Whether you think that is a good thing is up to you. We ordered three tacos each, which is our usual amount, although we quickly found out that these were more substantial than we are used to. A highlight of the meal was the “guest” taco from Centrolina’s Amy Brandwein, called “The Porky Pulpo”. It included braised octopus and pork belly with mache salad and Calabrian chiles. So good! Also good was the lightly battered and fried tilapia in the Black Pearl taco, although the black aioli resembled sludge and was not pleasant to look at nor was it particularly appetizing. I think we will return to Taco Bamba at some point, but there are other taquerias we would go to first.

We live so close that we felt it would be wrong not to attend Saturday’s Women’s March on Washington. While this is a food blog, of course, it was nice to be there and feel like we were part of something important.

Around 1:00pm we got hungry for lunch. We didn’t have anything in mind other than walking north, away from the Mall. A few miles later we ended up in Shaw at Smoked & Stacked, Marjorie Meek-Bradley’s new deli and sandwich shop. Chef Marjorie is a bit of a celebrity from last season’s Top Chef, so we were star struck to see her in the kitchen preparing sandwiches.

Smoked & Stacked is counter-serve restaurant, but I would not call it fast-casual. For example, it doesn’t have that assembly line atmosphere that is a hallmark of fast-casual restaurants. Instead, Smoked & Stacked has a chef-driven menu that clearly had a lot of thought put into them.   While you can customize your sandwich, it’s probably best to stick the featured sandwiches.

The star of the show is the housemade pastrami, so we could not miss that. We shared “The Stacked”, which is pastrami, slaw and Dijon mustard on a sea-salt topped milkbread bun. The moist and meaty warm pastrami gets a cool crunch from the slaw. The best part, though, may be the sweet and pillowy milkbread. In fact, it’s so good that it distracts a bit from the pastrami. Still, the chef can’t be faulted if her bread tastes too good.

The sandwiches are substantial in size and would make a hearty lunch. We shared one, plus a bag of Route 11 potato chips, so that we would have room for dessert. Conveniently, Buttercream Bakeshop is directly across 9th Street, NW. The much anticipated bakery is a partnership between former Neighborhood Restaurant Group pastry chef Tiffany MacIsaac and cake decorator Alexandra Muddy-Till.

We shared an “808 Bar”, which resembles a s’more. It ended up tasting like a luscious combination brownie, blondie and fudge sprinkled with toasted coconut. I also got a matcha latte, creamy from steamed 2% milk. The barista asked if I wanted it sweetened. I said “no” but if I could do it again, I’d say yes. This is a purely personal preference, but by having it sweetened, it just would have underscored the decadence of our trip to Buttercream.