Some of Washington, DC’s pricier restaurants have more affordable lunch deals during the week. You can take advantage of them if you know where to look. Luckily, we are here to give you a review of one of our favorite lunch spots.

Fabio Trabocchi’s restaurant group in particular has some wallet-friendly lunch offerings during the week. On a rainy Monday, we spent the morning exploring some of the Smithsonian museums and enjoyed a mid-day meal at Fiola in Penn Quarter.

The Maria Menu is named for chef/restauranteur Fabio Trabiocchi’s wife and business partner, Maria Trabiocchi. Described as being based on a “healthy Mediteranean diet”, the Maria Menu is three courses for $32, which is a steal considering most entrees alone at Fiola cost more than $32.

Another great thing about the Maria menu for the cost-conscious diner (and let’s be real, we all are) is that it starts out with an amuse bouche plus housemade rosemary bread. In our case, it was watermelon-tomato gazpacho with chive oil – a good way to start the meal, although it could have used a touch of cream to cut the acidity.

Sometimes servers can be a little too informal for their own good, which can be offputting. That is certainly not a problem at Fiola, where the well-trained and impeccably dressed staff are completely focused on making sure you have the best meal possible, no fooling around.

The Madai snapper crudo, from Japan, was paired with slices of grilled Jersey peaches and peach gel for swiping. The chilled, well-salted fish was the perfect foil for the peaches, ripe but by no means cloying and kissed by the char of the grill. 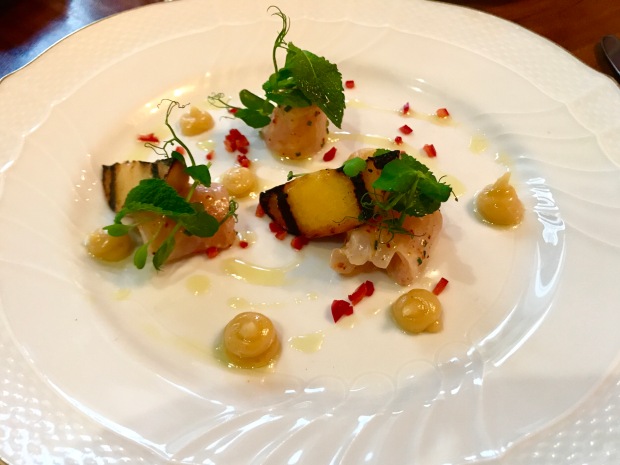 Our main course was a hulking Australian tiger prawn on a bed of Sicilian capunitina, similar to an eggplant caponata. This puree contained eggplant, pine nuts, capers and golden raisins. I found the capunitina to be too sweet at first, thanks to the raisins, but as I kept eating the flavors came together and made sense. The buttery, mild shrimp flesh needed the intense flavor of the capunitina. 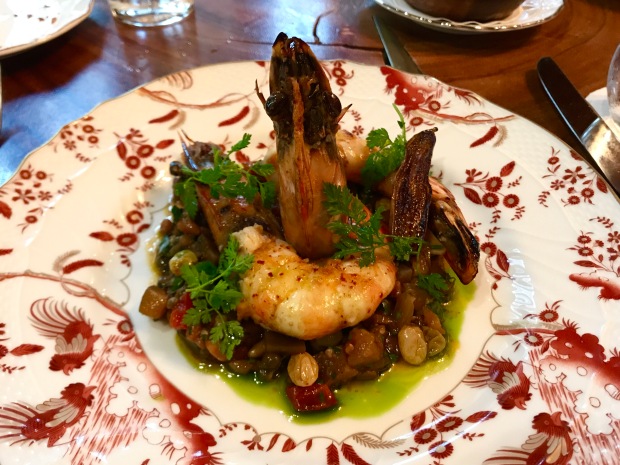 Dessert was billed simply as “Raspberry & Hazelnuts”, but it was far more interesting that those two ingredients. When it arrived at the table, it looked like raspberry custard with hazelnut flakes on top. A plunge of the spoon, however, revealed an entire ecosystem of flavors. Inside of custard was raspberry sorbet, whole raspberries and a luscious hazelnut praline.

The restaurant had been crowded when we first sat down, and we observed people talking and eating. I couldn’t help but think, though, that we were spending a lot less than they were. 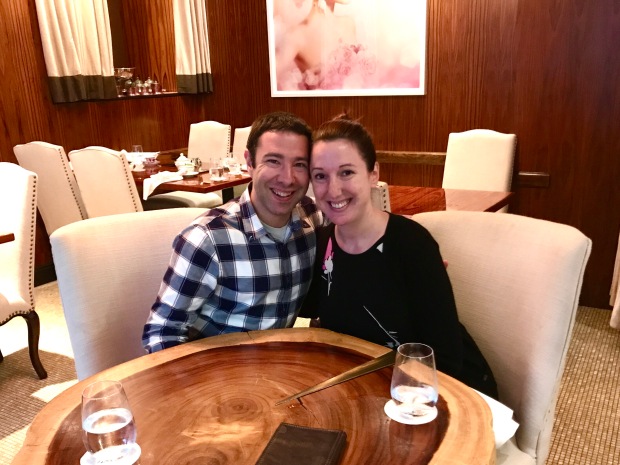