Many restaurants in Philadelphia have a “neighborhood” vibe – relaxed, intimate, unpretentious—possibly because of the low rents and less demand for older housing stock which can be used to create smaller restaurants. We are always on the lookout for restaurants with this vibe in DC, and were pleasantly surprised when we found Sally’s Middle Name.

The restaurant has two levels: downstairs is decorated with white subway tiles and was bustling with the din of diners when we arrived. Upstairs, where we sat, was calmer and felt more like someone’s home. In fact, it is so much like a person’s home the upstairs bathroom even has a shower. The entire menu, including drinks and dessert, is written on a full-size chalk board on the wall. While I think this approach is cute, it is frustrating to have to keep getting up to check the board. We took a picture with our phones, but everyone may not recognize that as an option.

Sally’s Middle Name is a small plates restaurant. We have noticed that servers at small plates restaurants tend to recommend an absurd amount of food—a suggestion of three to four dishes per person is not uncommon. It was a breath of fresh air, then, when our server at Sally’s Middle Name recommended 3 to 4 dishes total, meant to be shared. That immediately endeared us to the place. 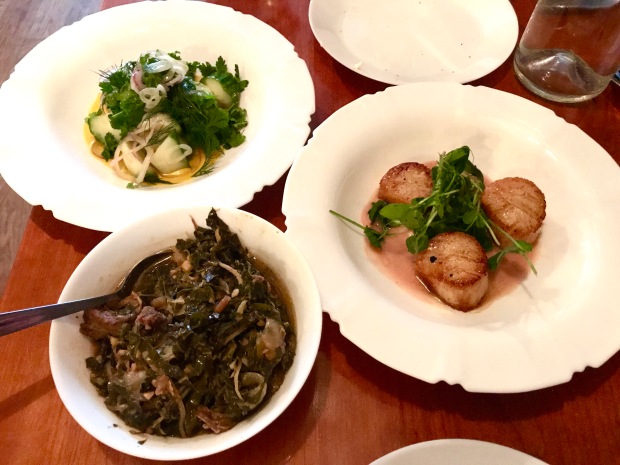 Anyway, the housemade white and wheat breads were delicious and a great start to the meal. They were even better with creamy housemade butter, although the white bread would have been fine on its own. For our remaining three dishes, we mixed and matched bites, not eating the dishes in any particular order. The collards appropriately got top billing, as this was a collard dish and not a pork dish—not that we minded. It was a play on traditional Southern collard greens, cooked with spicy Szechuan pork instead of a more traditional ham hock. We first got a major hit of ginger and then the lingering spice of Szechuan peppercorns.

Both of us were big fans of the buttery seared scallops served with a sauce of fermented turnips, lightly smeared on plate. The scallops were then topped with pea shoots, a nice taste of early summer. The cucumber salad, on the other hand, could have used some salt, even with a dressing of fermented carrots.

All of the portions at Sally’s Middle Name were reasonable in size, so we had room for dessert. We got an impressive Olive Oil cake with strawberry jam. The jam and the olive oil cake, which actually tasted like olive oil, were a perfect match. 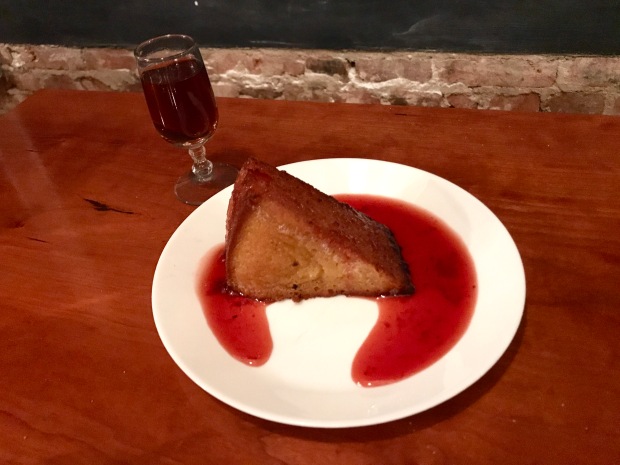 Based on atmosphere alone, we would go back to Sally’s Middle Name. We loved the lack of pretense, and oh yeah, the food wasn’t bad either.