Bob’s Shanghai 66 is located in a strip mall just off Rockville Pike, near the Rockville metro station. It has been in Washingtonian’s Best Cheap Eats for many years, so I was very excited to finally get to try it.

When we walked inside from the cold at 8pm on a Friday, the dinner rush was just about ending. We were greeted by a genial host who brought us to our table. Upon being seated, we were served complementary tea. The menu at Bob’s is long, but it helps to go in knowing that they specialize in soup dumplings, also known as XLB. You will want to make sure soup dumplings are part of your meal at Bob’s.

We took our own advice on the soup dumplings and also ordered lamb with cumin, sautéed snow pea tips (leaves) and dry noodles with pork. It takes practice to eat the dumplings, because they are twice the size of normal dumplings. They are also filled with very hot broth, so putting the whole thing in your mouth and biting it is out of the question. My suggestion is to gently pierce the top and have a spoon nearby, ready to scoop up the rich, gelatinous, porcine broth. 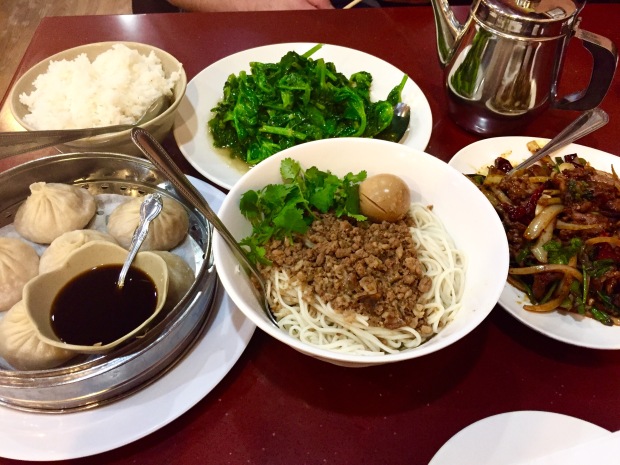 The surprise hit of the night was the snow pea tips. Next time we sauté greens at home, this is how I want them to taste. The preparation is simply snow pea leaves cooked in flavored cooking oils. Even when our table was crowded with food, this was the dish we kept coming back to. Also a surprise was that, at $16.95, they were the most expensive dish of the night.

Both ma and la of “mala” were present in the lamb with cumin. I had heard of mala before and knew that it had something to do with Sichuan peppercorns, but I did not know the exact translation until a read a review by the New York Times’ Ligaya Mishan of a restaurant named Sichuan Dry Pot. She explained that “ma” means tingling and “la” refers to heat.  The lamb was not quite as spicy as similar dishes at Peter Chang, but it was full of flavor.  I happily ate the leftovers for lunch on Monday. The dry noodles with ground pork, on the other hand, were unremarkable.  They were not bad, but it isn’t something I would order again.

As we finished our meal, the kitchen staff sat down at a spot near us to enjoy a tableful of their hard work.  Bob’s Shanghai 66 is a good deal in a metro-accessible location in Rockville. We will be back.