The morning after our Woodberry Kitchen dinner, we went to Jack and Zach food, which is located near my office and is one of my favorite lunch spots. Jack and Zach Food is just two guys, no other employees. But even though it is completely different in size and scale than Woodberry Kitchen, the two places are surprisingly similar. Like Woodberry Kitchen, Jack and Zach make almost everything themselves. There is a chalkboard with a list of homemade items, which includes things like their sausage and pastries all the way to butter. Making your own butter at two man operation shows true dedication to your craft. 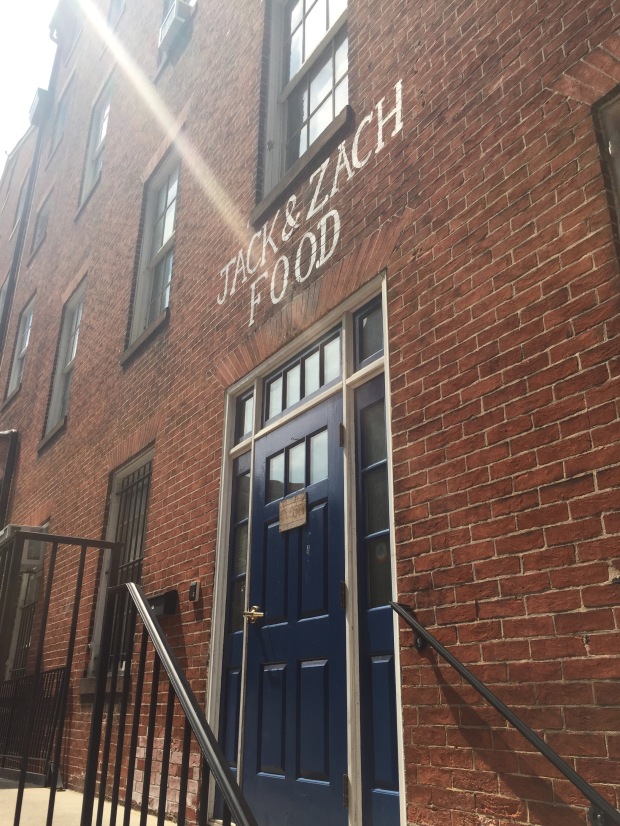 Jack and Zach has a L-shaped counter for seating, and each seat was taken when we arrived. There are scattered newspapers and books, including multiple books on how to make sausage. Eventually, two people sitting at the end closest to the door left and we swooped in, with plenty of room for our suitcase. Since restaurant is just Jack and Zach and since they want to make almost everything themselves, the menu is small. We both ordered the pancake plate, which comes with hash browns, breakfast potatoes and a side of meat. I chose their homemade curry sausage and Marnay chose bacon, which comes from Truck Patch Farms. I’ve had their bacon before and I let Marnay known that it’s one of my favorite bacons, so she was looking forward to it. To drink, we had Zeke’s coffee. Zeke’s is a local Baltimore roaster who recently opened up a small spot in the Woodridge neighborhood of D.C.

The pancakes, served with real maple syrup and homemade butter, were probably the best we have ever had. They were thin and almost crispy, yet not heavy at all. They complemented the syrup because they were thick enough to avoid becoming a sponge. Instead, the syrup was more of an equal partner. Marnay’s bacon was thick, meaty and smoky–nearly perfect pieces of bacon. My sausage was juicy and had serious kick from the curry. When Jack and Zach say that their homemade sausage will taste like something, they mean it.

Unlike Spike Gjerde at Woodberry Kitchen, Jack and Zach likely won’t be winning a James Beard Award anytime soon. However, it’s not completely far-fetched. Jonathan Brooks at Milktooth, which is in an industrial part of Indianapolis, only serves brunch. Yet, he was named one of Food and Wine Magazine’s best new chefs for 2015 and Milktooth was named one of Bon Apetit’s best new restaurants. Jack and Zach’s dedication to what they do which is one reason I considerate it a must-try when visiting Baltimore.