The night that we flew in to Charleston, we went to Husk. Husk is probably the best restaurant in the South, and likely one of the best restaurants in the country! The restaurant is in an historic mansion which was owned by a member of the Pinckney family, who were very prominent in the history of South Carolina.

We had a reservation at 10:15, but we preferred to eat earlier. Husk allows a limited number of walk-ins, so we arrived at the restaurant at 4:30 for their 5:30 opening.

We were the only ones there. Turns out that lining up outside restaurants before they open is not really a thing in Charleston. Luckily, Husk bar, next door, was open. The bartenders were both extremely knowledgeable and friendly. I had an Elijah Craig 12 year and Marnay had a “Charleston Light Dragoons Punch,” with the recipe from the Charleston Preservation Society. 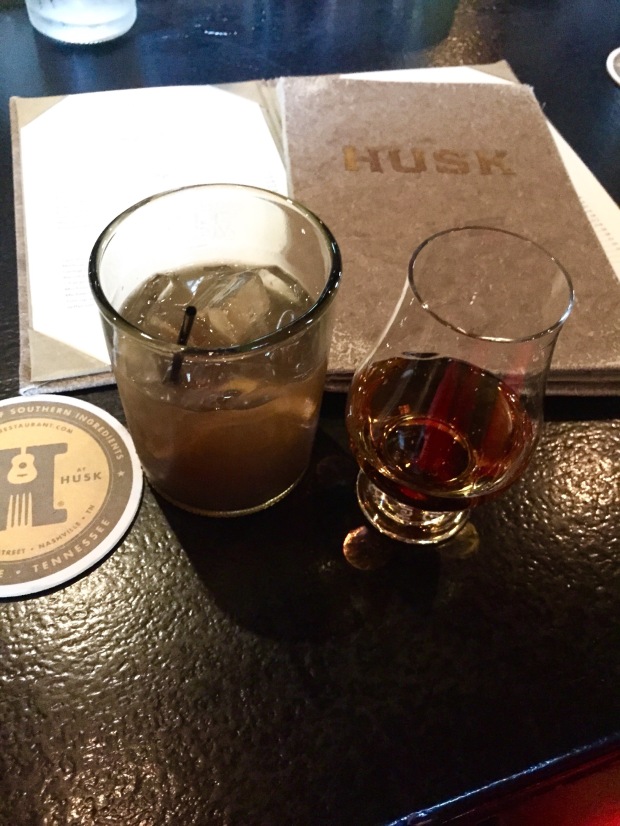 At 5:00, we left to stand outside the restaurant. There were two other parties, and we ended up talking with them. One guy was a flower wholesaler from California who sold to Trader Joe’s. Another guy was from Northern Virginia, although his parents lived near Charleston.

The “walk-in” section was the upstairs outdoor patio, and it really is the best seat in the house. Husk organizes their wine list by soil type, which is a great idea. Gives you an idea of the “terrior” of the wine, the indescribably quality that comes from the earth in which the grapes are grown. Husk also focuses on pre-Prohibition Southern dry ciders.

Marnay had one “volcanic” wine and one “limestone:” a chardonnay blend and a sauvignon blanc. The chardonnay blend was here favorite. I had two ciders, the second of which was combined with apple brandy and tasted almost like a port.

Once we received our drinks, the server brought us homemade benne seed rolls with pork honey butter. They were absolutely delicious, and actually one of my favorite parts of the meal. The salad we started the meal with was one of the best salads we’ve ever had-maybe the best. All the ingredients came together SO well. The freshness of the local grilled peaches and the blueberries were balanced by the crispy ham. The Cheerwine vinaigrette could have been overpowering with sweetness, but it was subtle.

On the other hand, the Benton’s bacon cornbread was disappointing. There was virtually no bacon.

Marnay’s main course was local grouper in a mushroom “tea.” Husk gets all of their fish from one fisherman. He goes out into Charleston Harbor in the morning, catches the fish, and the restaurant serves it that night. I had Heritage Spot Pork from a farm in Florence, SC. Husk specializes in pork, so I had to get it. It was delicious, and it came with pot likker, which is the liquid the collards are cooked it. That stuff was so smoky and savory. 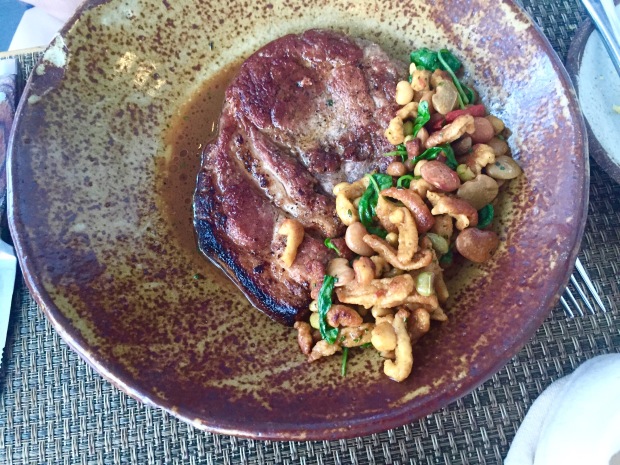 We were too full for dessert, so after dinner we walked home and went to sleep after our long day. Overall, Husk lived up to expectations! 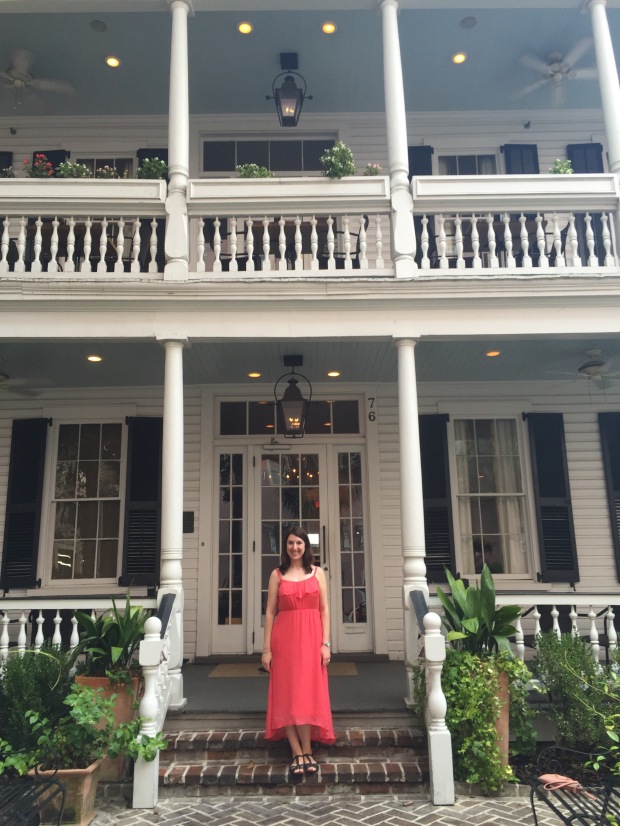